The Loagaeth tables are something I've been trying to figure out for decades, literally. More off than on though.  The Enochian entities would give me various setup options to contact them for more information on the tables in general and how to work with them.  I also performed a weekly group working where we each hand copied (in pencil!) each table.  Unfortunately we didn't make all 49 weeks!  Perhaps if we had better magnifying glasses, or better erasers I may have lasted longer :D.  The great table is rather large to begin with, and contains so much; many Enochian entities of all ranks and abilities; the 91 parts of the earth; elemental, planetary and astrological magic; even a set of cacodemons if the rest of the Enochian entities wasn't enough to keep you busy.

Now only are the 49X49 tables more than twice as large for ONE table, but we have 98 of them in total when including the front and back of each!  So what are these particular tables for?  Several people have postulated various things, which include elemental, planetary as well as astrological attributes for each table.  Quite obviously these tables are most likely similar to, or the same as the tables of Soyga, which Dee was extremely interested in obtaining the manuscript for.  Having a love for mathematics, codes, as well as hidden things within tables, he must have been quite thrilled when him and Kelly were able to start receiving the exact letters for these tables.  They are contained within the Sloane MS 3189 manuscript btw, if in case anyone wishes to see the originals.

The Soyga tables are 36X36 squares, with a base 6 code using the seed words listed above each table.  I figure that these 49X49 tables were, and can be created with the same principals, but using a base 7 code for each of the seed words.  Taking Soyga into account, I also figure the Astrological signs, the planets, and elements are likely involved as well.  I have done some experimentation with workings figuring they either start with Aries, or start with Pisces, then go further into the planets/elements, then finally into the 30 aethyres themselves.  30 aethyres, with 18 tables left to divide up between the astrological signs and planets/elements.

However, upon skrying and traveling these particular tables, I have come to the conclusion that they are more alchemical based in nature.  The various stages of the alchemical practice, as well as the changing an item from lead to gold, making an item (as well as oneself), into the philosopher's stone, and so forth.  When I inquired whether they were particular astrological signs and so forth, I was told that similar, but not exactly.  To take things even further, or perhaps to make them more complex and perhaps confusing, since there are 49X49X49 of them, essentially the overall table/structure is actually more 3d, or 4d (or 49d?)

I also had a vision of how to divide up these particular tables.  I have included the first table as an example.  I'm surprised that I hadn't figured this out a few decades back, but on the other hand, I was also doubting a bit due to the fact that it is far to similar to the great table.  After having several confirmations though, I have found that they work quite well broken up like this.

I have also had the impression that these particular tables are further coded, and they are not exactly as they appear.  Fortunately however, they will work just fine as they are, yet these is another version of each one when a particular code is applied.  I'm still trying to wrap my brain around this.  I figure it has something to do with the base 7 code with the seed word, but each square flipped to reveal a different relating letter.

Here is the vision that I had.  It is of the first table, but all 48 tables (the first one stays as is perhaps?) are also to be divided up in this manner. 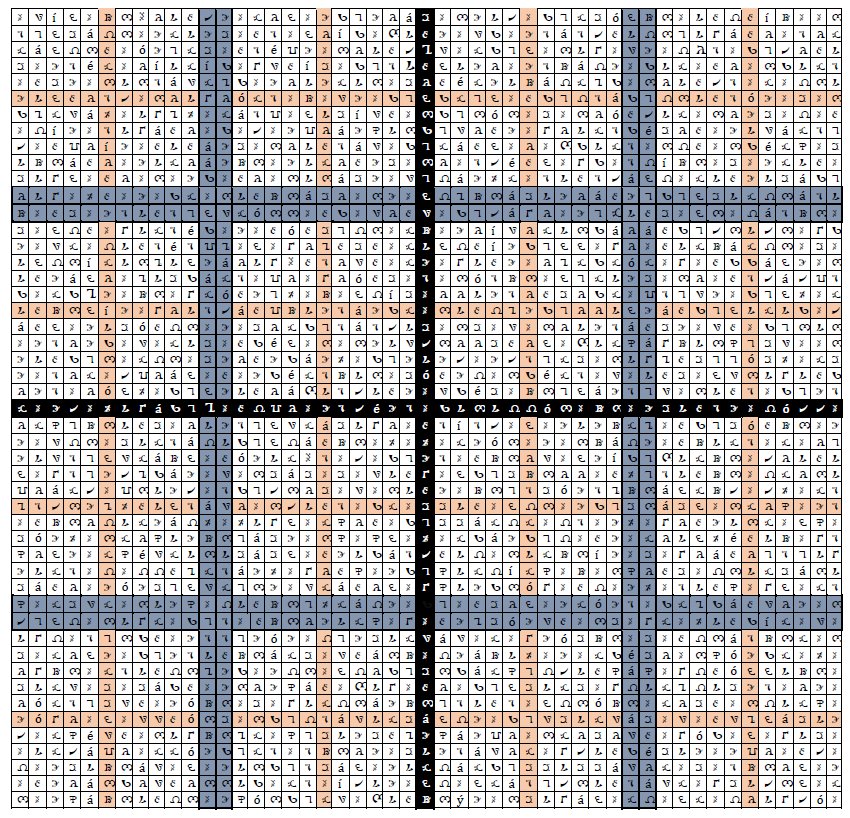